Coronavirus update: We are maintaining our full support for you during these challenging times. Read more

What will the retail CEO of the future look like?

Few sectors are as fast-paced and dynamic as retail – and therefore its leaders need to be innovative, future-facing and capable of making key decisions based on genuine insights from their ever-growing data stack. These were among the key takeaways from Page Executive’s recent annual Retail Dinner at the Houses of Parliament (May 18th), titled The Future Retail CEO. Held in the famous Churchill Room, the event saw some great guests and fantastic speakers discuss the challenges and opportunities retail leaders are set to face in the coming years. Click above to see our highlights video from the event. 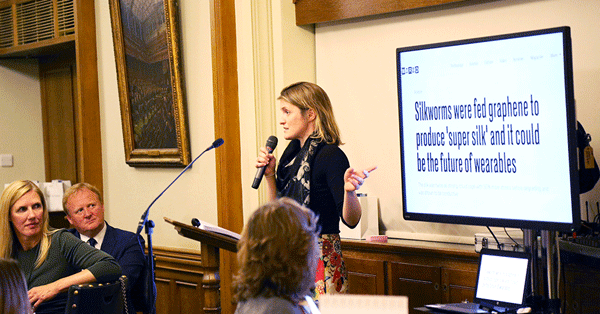 The evening begun with an address from Steve Ingham, CEO of PageGroup, who spoke about the ways in which the retail sector has evolved over his many years in recruitment, especially at the senior end of the spectrum. Guests were then welcomed to the dinner by Baroness Ruby McGregor-Smith, the sponsor of the evening. Formerly CEO of Mitie Group, Baroness McGregor-Smith was nominated as a Conservative life peer in 2015 and until recently operated as Non-Executive Director at PageGroup.

Next up, Eleanor Winton, formerly of KPMG’s Future Institute and now running her own business, Foresightfully, gave a glimpse of the technologies and innovations that could prove truly disruptive for the retail sector over the coming years. “The future is already here, it’s just not very evenly distributed,” she opined, borrowing a quote from noted sci-fi novelist and essayist William Gibson. To illustrate her point, Eleanor gave examples of how companies both inside and outside retail are finding new and exciting ways to capture the imagination, from the Impossible Burger (a vegetarian option that mimics meat so closely it bleeds) to silkworms which are fed graphene to produce super silk which could drive the wearable tech sector in the future.

Eleanor closed with another famous quote, this time from philosopher Thomas Aquinas, who reminded leaders that, “if the highest aim of a captain were to preserve his ship, he would keep it in a port forever”. The importance of innovation was further underlined by the evening’s second speaker, Sir Ian Cheshire, Chairman of Debenhams, Senior Independent Director of Whitbread plc, Chairman of the advisory board of the Cambridge Institute for Sustainability Leadership and most recently appointed as non-executive Chairman of Barclays. His address covered three key challenges retail leaders are set to face over the coming years.

Sir Ian remarked on the fitting setting for the evening, given that like Winston Churchill, retail CEOs need to be “authentic leaders”. He explained: “When you’re engaging with thousands of [staff] you have to start with being a real, authentic person. You cannot be a fake leader. We are literally the company that we create. You can have the freshest, most brilliant idea and if you can't get people behind you and your vision in the retail world, it won't work.” Staff motivation is key, as it leads directly to creating satisfaction among consumers, he continued. “Be an effective leader,” Sir Ian stated. “Inspire on one hand, but give the reality on the other and be willing to make decisions.”

2. Being customer-led, not product-led

In the digital world, retail leaders have more data at their fingertips than ever before and attempting to run businesses on “anecdote and intuition” is no longer possible. On the other hand, however, being purely data and analytics-led is not favourable either. “The days of the intuitive merchant prince that can somehow do stuff magically in retail and still sail through are over,” Sir Ian explained. “There is huge importance in using data to be creative, but if you don't understand the process of how data now drives businesses, and the test and learn principles needed, then you’re not going to get the most out of it.”

The evening concluded with a Q&A session, with workplace diversity proving a particular hot topic in the room. “Most businesses I’ve been involved in that have been troubled or failed is where people have been hired around the leaders image,” Sir Ian said, predicting that gender, racial and sexual diversity at CEO level will only continue to improve over the coming years. Hiring principles for senior leadership roles were also keenly debated, with Sir Ian concluding: “Force yourself to hire people who you don’t understand and spend time understanding them - doing so will turn you into a great leader.”

To discuss your hiring challenges - or if you are interested in attending one of our upcoming Page Executive events - please get in touch with Nicola Wensley.

We’ll be posting further content from the event on this site in the coming weeks – keep an eye out for our video interviews with Eleanor and Sir Ian, where they go into more depth on the discussion points raised at the dinner.

Previous article
What are the key challenges marketing leaders are facing in 2017?
Read article
Next article

Leadership challenges and the role of entrepreneurship
Read article