One of the most common conundrums that organizations face is why their gender and diversity programs are ineffective. Companies are now starting to invest a lot of time and resources into, but many struggles with creating training programs and implementing systems that produce real changes. Despite the popularity of gender and diversity, organizations grapple with how to overcome “diversity fatigue,” a term coined to mean diversity efforts that are lip-service and simply for face value.

Rethink and reinvent the way you lead gender diversity as a growth strategy – Is both acceptance from your teams & long term adoption possible? Join us with a panel of experts on this International Women’s Day as we share tangible actions to increase the effectiveness of gender diversity programs in Asia Pacific and discuss how companies can overcome the pitfalls that are often experienced. 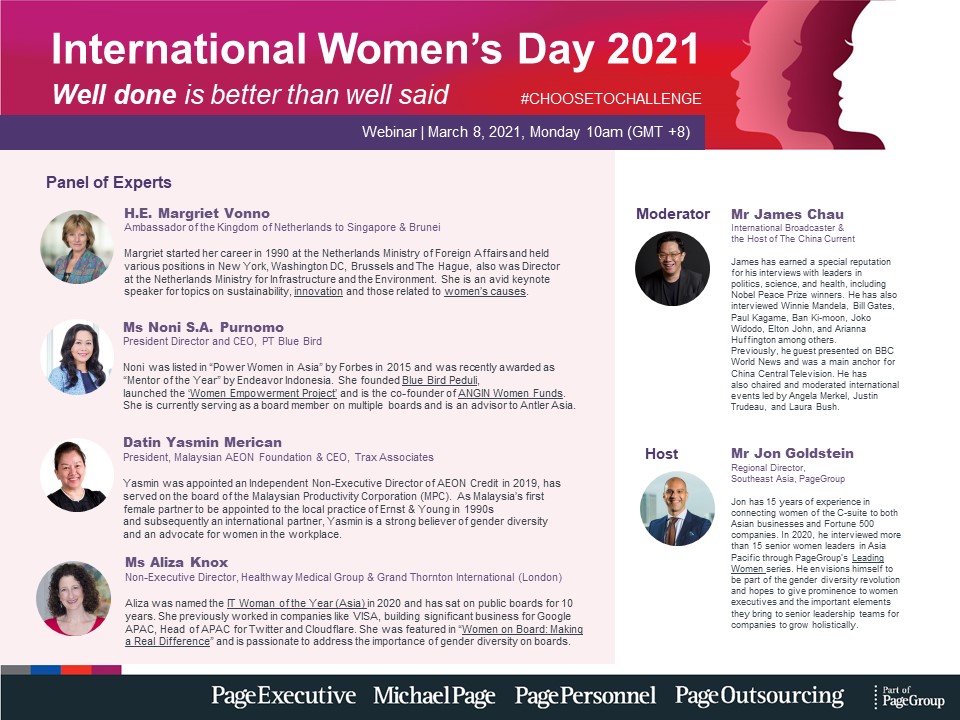 H.E. Margriet Vonno
Ambassador of the Kingdom of Netherlands to Singapore & Brunei

Noni was listed in “Power Women in Asia” by Forbes in 2015 and was recently awarded as “Mentor of the Year” by Endeavor Indonesia. She founded Blue Bird Peduli, launched the ‘Women Empowerment Project’ and is the co-founder of ANGIN Women Funds. She is currently serving as a board member on multiple boards and is an advisor to Antler Asia.

Yasmin was appointed an Independent Non-Executive Director of AEON Credit in 2019, has served on the board of the Malaysian Productivity Corporation (MPC). As Malaysia’s first female partner to be appointed to the local practice of Ernst & Young in 1990s and subsequently an international partner, Yasmin is a strong believer of gender diversity and an advocate for women in the workplace.

Aliza was named the IT Woman of the Year (Asia) in 2020 and has sat on public boards for 10 years. She previously worked in companies like VISA, building significant business for Google APAC, Head of APAC for Twitter and Cloudflare. She was featured in “Women on Board: Making a Real Difference” and is passionate to address the importance of gender diversity on boards.

James has earned a special reputation for his interviews with leaders in politics, science, and health, including Nobel Peace Prize winners. He has also interviewed Winnie Mandela, Bill Gates, Paul Kagame, Ban Ki-moon, Joko Widodo, Elton John, and Arianna Huffington among others. Previously, he guest presented on BBC World News and was a main anchor for China Central Television. He has also chaired and moderated international events led by Angela Merkel, Justin Trudeau, and Laura Bush.​

Jon has 15 years of experience in connecting women of the C-suite and on boards to both Asian businesses and Fortune 500 companies. He was based in PageGroup Japan, China and now Singapore. In 2020, he interviewed more than 15 senior women leaders in Asia Pacific through PageGroup’s Leading Women series. He envisions himself to be part of the gender diversity revolution and hopes to give prominence to women executives and the important elements they bring to senior leadership teams for companies to grow holistically.​

The Rise of Aircraft Leasing in Asia’s Aviation Industry
Even though passenger numbers are expected to double between now and 2037, it is not all good news in the world of…
4 min read
How Market Mapping can Help Make Informed Business and Hiring Decision…
As the competition for talent gets even tighter, companies are increasingly partnering with talent recruitment…
4 min read
Activate Future Readiness Today
Date and time: Tuesday 19th March 2019, 8.00 am to 10.00 am Location: Page Executive Boardroom, One Raffles Place Tower…
2 min read
The Golden Age of Tech Recruitment in SEA
Singapore is currently in a golden age for technology. With vision and direction coming from the highest level to…
5 min read
How can Asian companies win the talent war?
The march of Asian businesses moving into new and profitable global markets will not stop at any point in the near…
5 min read